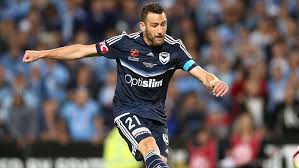 Carl Valeri said that many people thought that they were having a break but this is not the case. He said that they have two days off to stay with their friends and family and after that, they spend all their time on the training ground.

The Melbourne Victory captain said that he has been out of the team for some time due to injuries and that he wants to fight back for his place in the team.

He said that there is a good team spirit within the squad and that each player wants to fight to win games. He said that personally, he is feeling stronger and that he wants to help the team as much as he can in order to win maximum points.