5 Greatest Australians Ever to Have Graced the Premier League

The English Premier League is said to be the greatest league in the world, and the fact that 49 Australians have graced it is testament to the talent on offer Down Under. With so many great players to choose from, it’s hard to say who deserves to be in a top ten. But there should be absolutely no question over which players belong in the top five. Here are the five greatest Australians ever to play in England’s top flight. 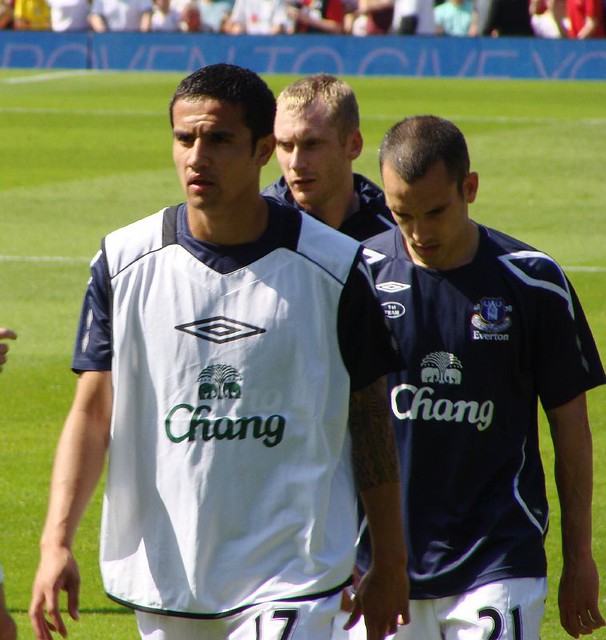 5. Mark Schwarzer Schwarzer is one of the best goalkeepers the Socceroos have ever had, and made a whopping 109 appearances for the country which included two World Cups in 2006 and 2010. It stands to reason that the 44-year-old was well-coveted by teams in England’s top flight up until the twilight days of his career.

Schwarzer began his time in England at Bradford City, but only made 13 appearances for the club in the 1996-97 season. He got his first taste of Premier League football with Middlesbrough, and became a mainstay between 1997 and 2008, clocking up 367 appearances for the North-East side. Schwarzer then moved to Fulham before ‘Borough were relegated in 2008-09.

The man between the sticks confirmed that he turned down offers from Juventus and Bayern Munich to join the Cottagers, and he put in 172 appearances for the club. He played a key role in Fulham reaching the Europa League final in 2010, and ended the best days of his career with Mark Hughes’ side. After that the player sadly faded away with brief stints as a reserve goalkeeper with Chelsea and Leicester City.

Neill made a name for himself battling in Division 1 and 2 with Millwall for 6 years between 1995 and 2001. The versatile defender was able to play as a centre-back or full-back, and could also chip in with goals at the other end of the pitch. In his 152 league appearances for Millwall he found the back of the net 13 times. His aggressive and combative style attracted the interest of top-flight clubs, and the Socceroo made the switch to the Premier League in 2001 to join Blackburn Rovers for an initial fee of £600,000 plus add-ons worth around £400,000 depending on appearances.

In 188 matches for Rovers, Neill was, for a time, a cult hero. But after snubbing the club’s offer of a new contract in 2006 to join West Ham United, he became alienated with fans of the Riversiders. After 79 showings for The Irons, Neill saw out his Premier League days with Everton. The player will go down as one of the fiercest defenders in the league’s history.

Viduka was one of the last great strikers at Leeds United before the once-popular club began their spiral downwards into the lower echelons of English football. The former Socceroos captain joined Leeds for £6 million in 2001 and became the focal point of the attack after Michael Bridges suffered a serious injury. Viduka scored 59 goals in 130 league appearances for The Whites but was sold to Middlesbrough in 2004 because of Leeds’ financial turmoil. He played at Borough for three seasons, scoring 26 goals in 72 appearances, before moving on to see out his final days at Newcastle United. The Magpies, like Leeds, were also relegated in the Australian’s final season at the club. But the huge Tyneside club managed to bounce straight back up after one season in the Championship.

Once again, Newcastle find themselves in the same situation as that fateful year. But as back then, due to the sheer might of the club they seem poised to return to the top division at the first time of asking. It would certainly be an unwise move to bet against them. In fact, some sites now give bonus bets to customers as an award for winning from their initial stake. Betting on Newcastle to beat most opponents this season could be a sure-fire way to earn that bonus, as the Magpies are now a formidable force under Rafa Benitez.

Another Leeds legend, Kewell, came up through the youth academy at Elland Road that has produced a number of other notable stars including James Milner, Aaron Lennon, Paul Robinson, and Alan Smith. Kewell was perhaps the best of them all, or at least the most stylish and pleasurable to watch. He broke into Leeds’ first team at the age of 17 in 1996, but didn’t score for the club until a year later in a League Cup win over Stoke City.

In the 1999-2000 season Kewell scored 17 goals across all competitions, and subsequently won the PFA Young Player of the Year award. This drew attention from Inter Milan who reportedly offered £25 million to buy the player, a proposition that Leeds turned down. The Australian attacker went on to become a key component in Leeds’ run to the semi-finals of the Champions League in 2000-01, where they were knocked out by Valencia. Leeds’ failure to qualify for the competition the following year triggered the start of the Yorkshire club’s descent into oblivion, and Kewell, like Viduka, had to be sold. Kewell had made 181 league appearances for the Elland Road side, and scored 45 goals. Prior to joining Galatasaray in 2008 Kewell was a Leeds legend, but the move to the Turkish club left a sour taste in supporters’ mouths.

The last side Kewell played for in the Premier League was Liverpool, his boyhood club. He spent 5 years on Merseyside but only put in 93 league showings for the club and notched 12 goals. He was never too far from the treatment table and there was little fanfare when he left after failing to earn a new contract with the Anfield club.

Cahill started off in the lower divisions playing with compatriot Neill at Millwall. He put in 217 league showings between 1998 and 2004, and accumulated 52 goals for the London club. Performances like that don’t go unnoticed, and eventually the big clubs came knocking. He joined Everton for a mere £1.5 million, in what turned out to be an absolute bargain for the club. At Goodison Park he earned legendary status after playing at the club for eight years.

In 2006 Cahill was even shortlisted for the prestigious Ballon d’Or award which made him the first Everton player in 18 years to be nominated. This highlighted just how much of an impression the Australian had made on the world stage.

Cahill went on to score 56 goals for Everton in 226 league appearances, making him the 8th top scorer ever for the Toffees. However, Romelu Lukaku looks set to leapfrog him this season. Cahill parted on good terms with the Merseyside club before moving to New York Red Bulls in 2012. He will always be a fan favourite at Everton, and his considerable contribution there is why he is number one on this list. He is also one of the most important Socceroos players of all time, with an amazing record of 48 goals in 94 games for his country.

These players have certainly set the benchmark for Australians who want to ply their trade in the Premier League. And they have proved that it is possible for men from Down Under to become the greatest players at their clubs during their spells there. Perhaps the likes of Brad Smith at Bournemouth and Aiden O’Neill at Burnley will be able to follow in their predecessors’ footsteps.